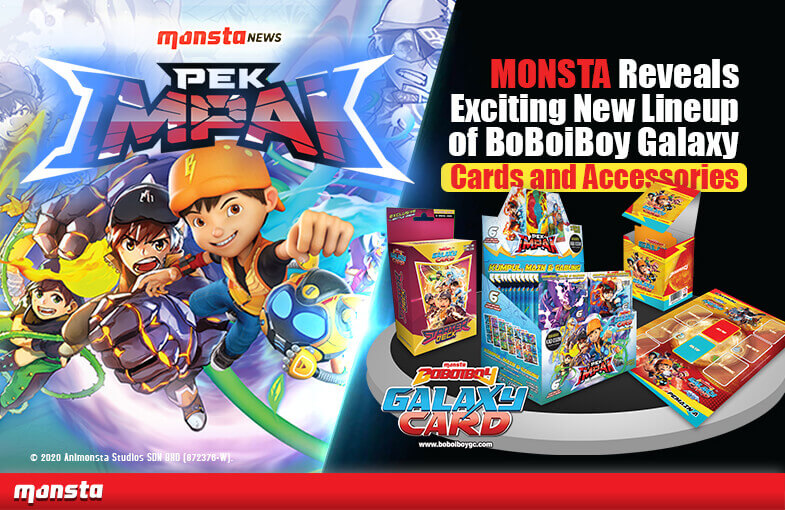 BoBoiBoy Galaxy Card fans will not want to miss the chance to complete their collection with 54 all-new exclusive cards filled with spectacular abilities. Each card in the pack will feature iconic BoBoiBoy Galaxy characters such as Tok Kasa, Maskmana, Man Ramen, and new ones such as Qually, Jaguh Lang, and Professor Utan, all rendered in stunning, 2D comic art style. To add a fresh twist to the gameplay, every packet will contain what Monsta calls ‘Kad Osom’ which can be used in place of the rock-paper-scissors phase for each round.

For new BoBoiBoy Galaxy Card players, getting into the game has never been easier as Monsta has released a new Starter Deck which comes with 3 special cards, 20 normal cards, and a paper Arena Mat all in a single package. With this, new players will have all they need to dip their toes into the game, have fun with friends, and win their first ever BoBoiBoy Galaxy Card battle.

Along with Pek Impak and the Starter Deck, Monsta has also revealed two new accessories to complement the collection. Players can now organize their cards using the BoBoiBoy Galaxy Card Deck Box. Moreover, the official Arena Mat ensures that players can battle it out in style–this new battle arena is made out of high quality non-slip material. Be sure to collect the whole set and enjoy the ultimate BoBoiBoy Galaxy Card experience, not just with friends but also with the whole family.