3 months ago 4 min read
By using our website, you agree to the use of our cookies.
Got it! 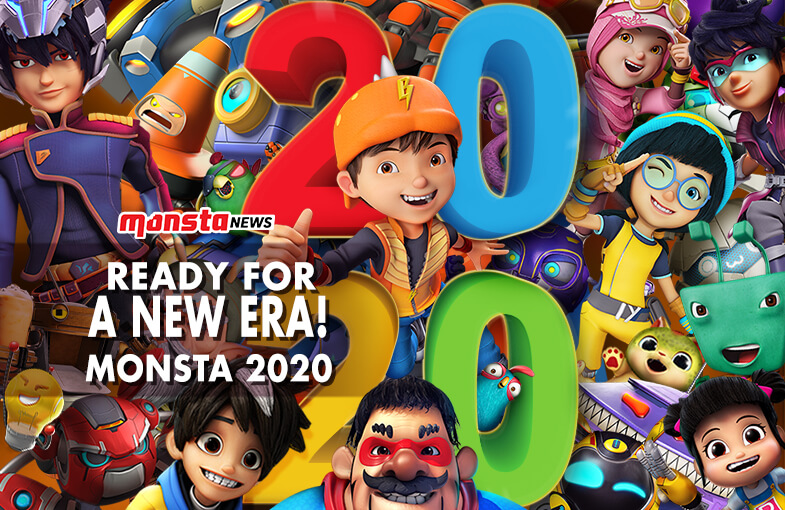 ▲ Monsta 2020 brings plenty of new and exciting contents! Check out this video!

Greetings from Monsta (Animonsta Studios)! We are delighted to share with you our latest video titled ‘MONSTA 2020 – A NEW ERA!’ on the Monsta YouTube Channel, which gives viewers a sneak peek at Monsta’s plans for 2020. Here are the highlights!

Monsta’s most anticipated new series and main focus in 2020 is Mechamato, which tells the story of young Amato who befriends a powered robot named MechaBot.

Together they can combine into the armored hero, Mechamato! Our blend of action and humour, coupled with gorgeous visuals and special effects will definitely delight fans and new viewers alike. Production of the show is currently in full swing, and it is scheduled to be released at the end of this year.

The antics of Papa Zola and his adorable daughter, Pipi Zola, have also proven to be a phenomenal hit with audiences.

Meanwhile, the antics of Papa Zola and his adorable daughter, Pipi Zola, have also proven to be a phenomenal hit with audiences. Their short 2-minute animated series on Monsta YouTube Channel, Pesanan Papa Pipi already has a combined total of more than 30 million views on various Monsta’s official platforms after only 8 episodes and that number continues to grow every week! So look out for more enjoyable episodes of Pesanan Papa Pipi in 2020! Be sure to follow their Facebook, Instagram and Tik Tok accounts too!

Next up! Based on the overwhelmingly positive reaction on social media, looks like fans of BoBoiBoy are also excited about the tease we have included for the new BoBoiBoy Galaxy which will make its return this year in full-colour comic form for Season 2.

BoBoiBoy Galaxy Season 2 (the comic) will feature BoBoiBoy and his friends on exciting new adventures as they explore beautiful alien planets and meet interesting new characters on their mission to rescue Power Spheras.

Fly With Yaya Tohoku aims to promote Muslim-friendly tourism in the Japanese region of Tohoku.

Finally, after the success of Fly With Yaya, the Japanese government has given its support in the development of the latest installment, Fly With Yaya Tohoku, with the aim to promote Muslim-friendly tourism in the Japanese region of Tohoku. Fly With Yaya Tohoku consists of 6 episodes covering all 6 prefectures in Tohoku, and has a total of over 3 million views on Monsta’s many official online platforms. Where will Yaya go next? Wherever it is, it’s sure to have a rich history, beautiful scenery, and local delicacies for Yaya to try.

2020 will be an exciting year for Monsta as we push the boundaries and venture even further in terms of animation and social reach. It is indeed a new era worth looking forward to, and we hope that you will continue to join us on this exciting journey.

BoBoiBoy has now become the ambassador for Pharmaniaga